The Devotion of the Way of the Cross (2018)
Fr. Martin Fuchs´s sermon on 18thJanuary 2018, Prague, Czechia
Passion Sunday
***
Dear faithful!
Beginning with this Sunday we enter Our Lord’s time of suffering, His hour of which He had spoken so often.
For the first time He spoke of His hour at the wedding in Cana when the wine failed. “Woman … my hour has not yet come.“ (John 2:4)
For the second time this hour, His hour, is mentioned in the conflict with the Jews in the temple: “They thought therefore to apprehend him: And no man laid hands on him, because his hour was not yet come.“ (John 7:30)
For the third time we read of His hour when Jesus taught the Pharisees in the treasury of the temple:
“…and no man laid hands on him, because his hour was not yet come.“ (John 8:20)
At the Last Supper, this hour was come, that he should pass out of this world to the Father. (John 13:1)
And at the Mount of Olives it finally came: “…Sleep ye now and take your rest; behold the hour is at hand, and the Son of man shall be betrayed into the hand of sinners.“ (Matthew 26:45)
This hour, His hour, is the Passion, is His suffering. He came into the world in order to redeem men on the Cross.
During this period we shall contemplate the Passion of Our Lord Jesus Christ. During this period Church reads Christ’s Passion which the holy evangelists have transmitted to us. She says the sorrowful Rosary, the Way of the Cross, and other devotional exercises to honour Christ’s Passion, such as the devotion to the holy five wounds, the devotion to the holy face etc.
Today let us reflect on one of these devotions, the Way of the Cross.
Ann Catherine Emmerich saw how already the Mother of God, together with other women, often walked along the Way of the Cross. Later other pious Christians followed them. Some stations of the Cross are guaranteed by the Gospel, others by tradition, such as the 3rd, 4th, 6th, 7th and 9th station. The stations: “Jesus falls for the first time under the Cross – Jesus meets His sorrowful Mother – Veronica wipes the face of Jesus with a handkerchief – Jesus falls for the second time under the Cross – Jesus falls for the third time under the Cross“, these stations are not mentioned in the holy Gospel.
In early times already the stations of the Cross were marked by stones or by chapels. In about 327 A.D. the empress Helena gave orders to look for the Cross.
In the Chapel of the Finding of the Holy Cross here in Prague we have a very beautiful portrayal of this event above the altar. At that time empress Helena found three crosses and at some distance the legend which had been fixed on the Cross of Our Lord and from which Saint Evangelist John reports (19:20) that it had been written in three languages – in Hebrew, Latin, and Greek.
But it could not be determined on which one of the crosses the legend had been fixed. Then a miracle brought the solution of this difficulty. After a fervent prayer Bishop Macarius of Jerusalem ordered to impose the three crosses, one after another, on the body of a seriously ill lady. The first two did not bring her any recovery but the third one immediately cured her as is reported in the Roman breviary on the 4th May.
Here in Prague the artist did not portray an ill lady but a young man. 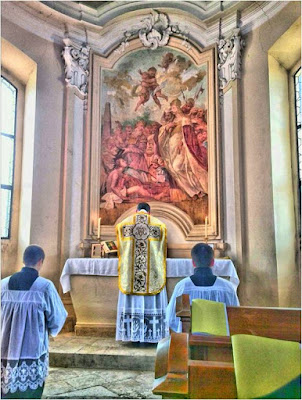 After Helena had found the salutary Cross, she ordered to erect a magnificent church at the finding place and in the church she left a piece of the Cross in a silver case. She brought another piece of the cross to her son Constantine.
This piece was kept in Rome in the Church of the Holy Cross of Jerusalem which is now one of the seven basilicas of Rome, besides St. Peter’s Basilica, the Basilica of Saint Paul, the Basilica of Saint John Lateran, the Basilica of Saint Mary Major, the Basilica of Saint Lawrence and the Basilica of Saint Sebastian.
Saint Helena also brought her son the nails with which the Most Holy Body of Jesus had been nailed to the Cross.
On her request Pope Sylvester I granted indulgences to those who visited the places of the Passion.
The Franciscans to whom the holy places had been entrusted since 1342 were the first to erect the Way of the Cross in their churches, in order to give an alternative to those faithful who could not make personally a pilgrimage to Jerusalem.
The devotion to the Way of the Cross soon spread out beyond the churches of the Franciscans. In many places entire Calvaries were erected such as for example the Calvary in Graz (Austria) and in many places in Germany, France, Poland and other countries.
Pope Innocence XI was the first to grant indulgences also for these Ways of the Cross, and thus the Way of the Cross became one of the most popular devotions of the Catholic people.
The Way of the Cross did not always and everywhere have 14 stations although this one finally prevailed. Initially, there were only two stations in Jerusalem. In the pilgrimage church of Maria Loreto in Bohemia (near the town of Eger) there is the Way of the Cross with 27 stations. During the 15th century the Way of the Cross of seven stations spread out, following the seven hours of day of the breviary and the seven Roman basilicas.
Why should we say the Way of the Cross?
Because:
We should say it with the intention to thank God, to change for the better and to gain the indulgence which is connected with this devotion.
Someone who says the Way of the Cross privately has to walk along the stations in order to gain a full indulgence. If it is said in common, at least the priest who leads the prayer has to walk along the stations. The faithful remaining at their seat should at least honour each station by a genuflection.
Let us watch what Jesus wants to teach us at every station: We should make no reply even if we are condemned unjustly. We should bear our cross with love, rise again when we have sinned and never lose heart. We should beg the Mother of God to come to our way of Cross in order to console us.
Christ teaches us to let others share our way of Cross sometimes and to bear grumpy persons. We should profess our belif in God like Saint Veronica did and we should remember our sins when we suffer. Like Christ we should be ready to give all we have for God out of love and to be bound by the duties of our state and profession.
Like Christ we should accept death from the hands of God devotedly and willingly. In the Holy Communion we should receive Him in our bosom with the pure heart like the Mother of God did after His Descent from the Cross; we should also take care for a Christian funeral.
Dear faithful,
After the people had grumbled in the desert, God sent venomous serpents as a punishment. The people cried out for Him and God ordered Moses to produce the brazen serpent.
Everybody who looked up to it with confidence has been saved.
The brazen serpent is a model for Christ’s Cross. Everybody who looks up to Christ’s Cross faithfully and with confidence will be saved.
During the coming two weeks let us particularly cultivate the devotions to Christ’s Passion! Amen.